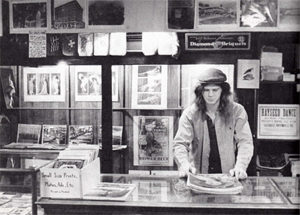 I opened Old Seattle Paperworks in 1976 on 8th and Pike Streets in downtown Seattle, Washington. A lifelong obsessive compulsive collector, I had previously been eking out a meager living as an antique picker and book scout since leaving home at age 16. Coming of age at the height of the hippy movement left me with an aversion to any sort of legitimate career or education. Haunting junk stores, and used book shops, in search of treasure suited me just fine. It was a time before the internet and antique “maIls”, when shops were owner-operated, and usually reflected the hearts and souls and obsessions of those who conceived them. I befriended dealers, of whom there were many back then (Seattle being the town with more bookshops per capita than any city in the nation). One of these dealers in particular took me under her wing. Nora Ottenberg was shrewd, business savvy, and filled with an encyclopedic knowledge of a vast array of subjects – she was the quintessential antiquarian book dealer. Admiring her experience, and greatly appreciating her razor sharp cynicism and acerbic sense of humor, I was proud to become her sidekick. Ottenberg Books was located at 724 Pike Street sandwiched between The Tokyo Tavern (the sign outside read: “girls to play pool with”) and the infamous Exotica Dance Studios, where women in bikinis danced in full length picture windows facing Pike Street, and fleeced their eager-eyed customers in the back rooms. Nora and I cruised the city in her vintage Citroen DS – 21, filling the trunk and back seat with books and, as she called it, “keen stuff” from estates, junk sales, and auctions. She was one cool lady, and it was an honor to have her as a mentor. When she passed away a few years later all who had known her understood, that there was only one Nora Ottenberg, and her passing left a permanent void in our community of booksellers.

The year before her cancer was diagnosed, Nora had built, to her detailed specifications, her perfect bookshop. It was located across the street from her old location, in the historic terra cotta Mountaineers Building. When the new shop was completed and she was all moved in, a skeleton of empty shelves and anything not deemed worthy of the new shop, was left behind in the old shop. Tired from moving library carts across Pike Street all day, I was floored when my dear friend said something to me that changed my life forever. She announced that it was time for me to grow up, and become a respectable man with a real job. She handed me the keys to her old shop, and a cigar box filled with ones, fives and coins, and said: “you open your shop tomorrow”. I was 22 years old. 724 Pike had been a bookshop under three different proprieters since the 1920s. I became the fourth and the last. It was a big airy space with 20 foot ceilings and a loft in the back. The building was so old that the shop’s bathroom was built in a lean-to like structure off the back of the building. I did open that next day, May 1st, 1976, without a sign or a name, amidst the choas of the remnants of a real shop. I think I made around $14. The next day was better and the day after that better still. I was no longer a scout and a picker – I was a book dealer.